One of our first stops in Burkina Faso is at the Mogtedo V6 Primary School where we were able to construct a standard deep borehole well. For those of you who do not speak “well”, a deep borehole well is a vertical pipe with a well screen that prevents surface contaminants from entering the borehole, protecting the pump from drawing in sand and sediment. Pretty cool, right? 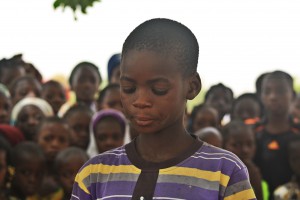 Upon entering the village, we were welcomed by a celebration thrown by the local community and school. Such a surprise!  Students attending the school and elders from the villages gave words of thanks. A particular student who stood out to me was a boy named Patrick. A nervous sixth grader, Patrick gave a speech about how important water was to his community and gave a pledge on behalf of all the students to take care of the well. Being a shy guy myself, I sympathized with Patrick and if anything, saw a lot of myself in him. It’s always great having youth engage in our projects so Patrick, if you’re reading this keep up the great work! 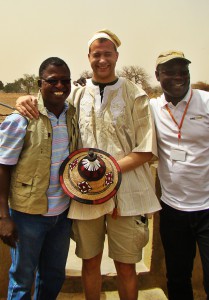 After the speeches, I was given a local customary shirt and hat as part of the official proceedings of the ceremony. The only problem was that a big framed guy like me rarely fits into regular clothing, so while I struggled to squeeze into the shirt I was gifted with, the locals were treated to quite an entertaining show! Once the laughter had died down, an elder of the village named Mouriama stepped forward. Having been the one to donate the land upon which the well was built, he began to tell me the meaning behind the traditional clothes I was now wearing.  By accepting this clothing, I was now a part of their community and had accepted everlasting friendship.  Touched, I told him that in the future, whenever I wear these clothes I will always be reminded of my family in this village. 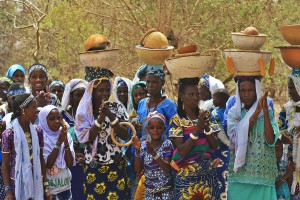 Honestly, it is days like today that are the most rewarding. Seeing the direct impact that our work at Ryan’s Well has on a community…there’s really nothing else like it.