Ryan’s Well: The True Story about a boy and one well that changed everything

Ryan’s Well is an inspiring and remarkable story that embodies the Power of One. By the time Ryan Hreljac was 9 years old, he raised thousands of dollars to build wells and provide drilling equipment to the people of Angolo, Uganda.

Ryan’s motto has always been that

His remarkable story begins when he was just 6 and in Grade One in Kemptville, Ontario. His teacher told the class about young children in Africa having to walk hours every day to get a bucket of dirty water to drink, cook and bathe with. Ryan counted his steps to the water cooler and went home that day and asked his parents for $70 to build a well in Uganda. They agreed to pay him to do extra chores. When he learned a well really cost $2,000 he enlisted his classmates, family and friends. He made sure his first well was built near a school. He also found a pen-pal Jimmy, and a special relationship grew. His commitment was rewarded by generous neighbours who made it possible for him to go to Uganda and see for himself the difference he had made to so many people’s lives – and to meet Jimmy. This film takes you on that journey.

ALSO INCLUDED: AN UPDATE TEN YEARS LATER
In this re-released edition, you will pick up Ryan and Jimmy’s incredible story, a decade later. Several months after Ryan’s visit to Uganda, Jimmy and some other Angolo boys, were abducted by guerilla fighters. Jimmy escaped but it was too dangerous to return to his village. Ryan and his family moved heaven and earth and finally managed to get Jimmy to Canada and adopt him. Together and with the Ryan’s Well Foundation, they have raised over a million dollars and built hundreds of well in Africa.

Available for rent or purchase from the following retailers.

Twenty years ago a six-year-old boy named Ryan Hreljac raised over $2000 for a well at Angolo Primary School in Uganda, by doing household chores and rallying his community. When he eventually visited the school and shyly traipsed down a dusty lane flanked by joyful villagers applauding their small hero, this unassuming little boy walked into history.

The line of cheers formed again in May of 2014, when Ryan and his family returned to the site of that very first well in Uganda to mark its 15th anniversary, and to monitor the projects in the area. Over 4,000 people were there to greet him; bursting into applause as his vehicle came into view.

He may have been a great deal taller, but he was still their Ryan, and the happiness and health he had brought them was reflected in their smiles and their cheers.

In a ceremony rich with music and dance, the people of Angolo Community welcomed their Canadian son home. Young and old waited to have a few words with Ryan, give him gifts (chickens and eggs) and have their picture taken with the young man who had given them so much hope. Ryan had time for them all; bending low to chat with the smallest children and speaking respectfully to the elders.

Since that first well was built, the clean water that now flows from over 1,667 water sources worldwide brings healthier lives. Over 1,317 sanitation facilities now arm people in developing countries against disease. School children, community organizations, local businesses and countless generous donors have made Ryan’s Well their own, and brought real hope to over 1,342,555 people.

Available for rent or purchase from the following retailers.

Ryan and Jimmy: And the Well in Africa That Brought Them Together 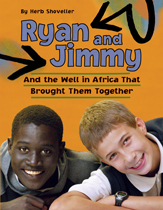 It costs a lot of money to build a well in Africa — a lot more than Ryan Hreljac had thought. Still, the six year old kept doing chores around his parents’ house, even after he learned it could take him years to earn enough money. Then a friend of the family wrote an article in the local newspaper about Ryan’s wish to build a well to supply people with safe, clean water. Before long, ripples of goodwill began spreading. People started sending money to help pay for Ryan’s well. Ryan was interviewed on television. His dream of a well became an international news story.

In Agweo, Uganda, villagers were used to walking a long way every day in search of water. What they found was often brown and smelly and made a lot of people sick. But when Ryan”s well was built, life in the village changed for the better. A young orphan named Akana Jimmy longed for a chance to thank Ryan in person for this gift of life — clean water.

When they finally meet, an unbreakable bond unites these boys from very different backgrounds, and a long and sometimes life-threatening journey begins.

Ryan and Jimmy is part of CitizenKid: A collection of books that inform children about the world and inspire them to be better global citizens.

Available for purchase at the following retailers.