While most nine-year-olds usually get a dog or a cat as their first pet, when I was nine my first pet was a goat. Yup, you read that right. Allow me to explain. 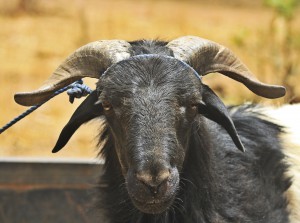 As many of you know, one of my first ever wells was built at The Angolo Primary School in Uganda. When I arrived, the community decided to give me a goat as a thank you gift. Excited and making all kinds of assumptions, I wanted to name it Fried Chicken since I thought that he would be part of the celebratory dinner that evening. My mother, trying to contain her horror, gently told me that Fried Chicken probably wasn’t the best choice and that I should name him something else. Thinking about the opportunities that were now available to the community because of clean water, I gave Fried Chicken a much more appropriate name – Peace. As luck would have it, Peace was not part of the evening meal and we became pals. I took Peace for walks each day and grew attached to my pet goat, but eventually had to leave him and return to Canada. 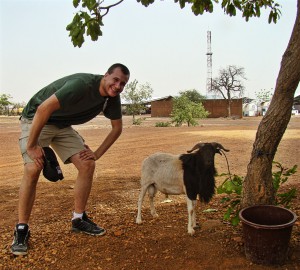 Fast forward 15 years to Burkina Faso, and I, Ryan Hreljac, have yet again been given another goat—this time named Frank.  While having dinner that evening, our partners asked what I was going to do with Frank.  With a dead-pan face I told them, “I’ve been thinking about it, and I’ve decided that I’m going to bring him back to Canada and start a farm,” a situation which was entirely plausible since I had also been given a number of chickens. While the hosts exchanged looks of alarm, I remained as serious as I could. When one man began to gently explain flight violations, and how you weren’t allowed to bring animals out of the country, I broke down laughing and told them I was joking.  As much as I would love to bring Frank back to Kemptville, Ontario, he will stay with one of our supporters in Burkina Faso.

So there we have it! Now you know the story behind me and goats. My next stop is Kenya, I’ll fill you in when I get there!