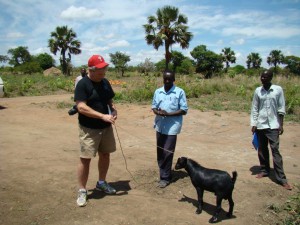 Shawn. left, receiving a goat on behalf of Ryan’s Well as a gift of thanks

Recently Ryan’s Well Chair of the Board of Directors, Shawn McCarthy, traveled with our Project Manager Mark to the the Ruhinda Region of Western Uganda. At 61, Shawn has served on the board of Ryan’s Well since 2009 and has been chair for the past five years. He has had a long career as a journalist, and is now working as a business reporter for The Globe and Mail in its parliamentary bureau.

Below, Shawn recounts his experience with our partner, RWIDF.

We follow Hellen Kabajungu and Immaculate Natakunda down a steep, mud-slippery path past small family compounds to the Rwabwingi protected spring.

The clean water project was managed by the Ruhinda Women Integrated Development Foundation, where Hellen serves as chairperson, and was funded by Ryan’s Well Foundation.

Constructed last year, the Rwabiwingni project features a tap in a concrete holding tank which is fed by a natural spring. It serves 34 local farming families who used to rely on dirty, disease-inducing water from a pond that had formed from the underground spring at the site.

As women and children gather to greet the visitors from Canada, Immaculate explains how the protected spring has saved women from having to boil the water – a time consuming and expensive effort. And how access to clean water has meant their children are less prone to diseases like diarrhea, typhoid and cholera.

“We are so happy,” she says. “It was very expensive to boil the water” using firewood or charcoal. She notes the women who have gathered with their children as RWF project manager Mark Hreljac inspects the work. “They have stopped working in their gardens and come to say ‘thank you’,” Immaculate says, as Hellen interprets.

The Ruhinda Woman Integrated Development Foundation formed in 2002 as a support effort for widows of men who died from the HIV virus that has ravaged the region. The hilly Ruhinda district lies in an isolated corner of southwest Uganda, with Congo’s mountains visible to the east, and Rwanda, some 50 kilometres to the south. 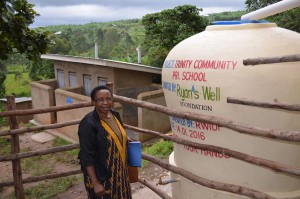 Hellen and her husband Steven, who serves as development manager, started working with Ryan’s Well in 2003. Since that time, RWF and RWIDF have constructed 184 clean water sources, as well as 15 latrines and nine rain-water-fed hand washing stations at area schools.

Each project is managed by a community or school committee; they are often led by women – an important breakthrough, says Hellen. The committees collect a small monthly fee from each family to pay for eventual repairs.  This is done with the aim to establish micro-financing in the subsistence farming communities, where the purchase of a goat can greatly increase a family’s income and where an illness can be financially devastating.

Family members – usually women and girls – still have to traverse the steep slopes to fetch the water, but they no longer rely on fetid pools.

RWDIF also works with communities and local schools on water and sanitation education.