It’s always so nice to meet the people who have personally benefited from the work we do. There are lots of interesting people who all have their own dreams, goals and aspirations – especially the kids.

In the Rift Valley, I met such a person. Her name was Sarah. When I arrived at her home, the house boasted a small Manchester United football flag over their roof, alongside wording that read the family had been fans since 1878! I am not sure how accurate the claim is, but it did make me smile. 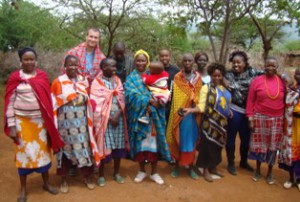 While inspecting the harvesting tank we built for the couple families in the community, I asked Sarah which Manchester player was her favorite.  Sarah did a face palm becoming mildly embarrassed. She explained that it was her father and brother who are United fans. She was actually an Arsenal fan.  I dramatically wiped away sweat from my brow with relief, telling her that that was good, because it meant we didn’t have to be arch enemies because of her neutral allegiance to the Gunners. Sarah and I both laughed and we went back in to her home.

Sarah was 12 years old. We talked about the Rift Valley, where I came from in Canada, and what life was like before the water tank was put in. She explained that before the tank was installed, she had to walk three kilometers to collect water from a dam. She often did this three or four times a day.  She was only too happy explaining that it was her most dreaded chore because it took up so much of her day.  It was great meeting Sarah and always a pleasure to connect a project to a person whose life has benefited from it.