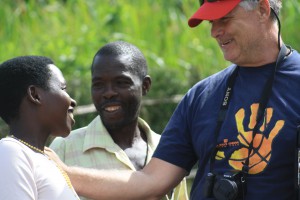 See below for project results

Here at Ryan’s Well, our goal is to remain sustainable and responsible in all that we do. Throughout the 2016/17 fiscal year, we plan to visit each community and site where work has been completed since 2003.

After the data has been gathered, we will address program delivery going forward and make the positive changes in improving what we do.   As a result of Project Look Back, we will address any problems identified and deal with those in future project work. Ryan’s Well will provide our supporters with the results of this project after all information has been obtained.

RWIDF (Rukingiri Women’s Integrated Development Foundation) has been an implementing partner with Ryan’s Well since 2003.  During this period of time, 182 protected springs, 2 deep wells and 15 latrines with permanent hand washing stations have been constructed.  As a part of project implementation, communities have received training in community development and committee set up as well as substantial WASH training.  These are all critical pieces for the sustainability of all project work.

Over the years, Ryan’s Well Foundation has consistently heightened its focus on project sustainability in order to ensure long-term benefits to vulnerable communities. In 2017, Ryan’s Well Foundation (RWF) launched “Project Look-Back” in collaboration with our Ugandan partner, Rukungiri Women’s Integrated Development Foundation (RWIDF). The purpose of the project was two-fold: to glean information on the state of RWF-funded water projects, and to build the capacity of our partners to conduct such assessments. Project Look-Back provides an initial framework for post-project evaluation as part of our ongoing sustainability effort.

Ryan’s Well Foundation has supported the building of water, sanitation and hygiene projects in Africa and Haiti for 16 years. Working with local partners, we have improved the lives of more than 892,725 vulnerable people through the construction of over 1,166 community-led clean water projects and 1,245 latrines. Our team assesses the facilities and meets with community water committees soon after project completion. However it has been challenging to determine to what extent communities and local authorities are truly self-sufficient in operating and managing the facilities over the longer term.

With funding from RWF, Rukungiri Women Integrated Development Foundation has, over 12 years, constructed more than 212 water points, 2 deep wells, and 15 latrines. In March 2017, RWIDF submitted its report that covered 118 water sources and latrines built since 2004.  Of the 118 sites visited, 113 were reported to be functional and in full use; three were functional but in dis-repair and not in use, and two were either completely broken down or the water source had dried up.

Of the 118 reporting communities, 117 said they had maintained water and sanitation committees which are charged with operating and maintaining the wells and providing sanitation education. However, 25 per cent of those said their committees existed mainly on paper and were no longer functional. Of the 118 sites visited, 78 committees hold regular meetings; 40 did not.  The sites where committee were not meeting regularly coincided with those where the water sources were not fully functional. The researchers had incomplete data on the number of committees collecting funds for maintenance and repairs of the water sources. Only 66 of the 118 project sites responded to that question, with 60 reporting they were still collecting funds and 6 saying they were not. RWF encourages local committees to include women among their members. The committees told researchers that, in total, 29 per cent of their members were women.

The researchers relied heavily on questionnaires provided to water committees at each of the 118 project locations. The surveys were supplemented by site visits that included interviews with committee members and observation of the water source. The methodology had its limitations, including reliance on subjective interpretations of respondents. When researchers attempted to measure health behaviours and improved access to water resources and services, they often relied on self-reported data that were subject to various biases.

These kind of evaluations are critical to sustaining the longevity of our work.  They inform us about our true capacity and impact as well as help us plan for future work.  We will continue hold ourselves to high standards of making sure our work delivers for years to come.

Every effort is made to designate your funds as requested; however, if the specified project has become fully funded or unforeseen circumstances delay its start, we may allocate your donation to another important project.